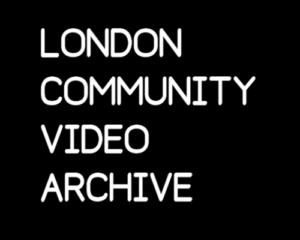 London Community Video Archive (LCVA) was set up to preserve and share videos made by community groups in London between 1969 and 1985. When they were first produced and screened, the videos made a major difference to many communities, highlighting injustices and untold stories on issues ranging from housing, race, gender, ageing, local activism, sex and sexuality, as well focusing on specific areas of London.

With an overriding commitment to social empowerment and to combating exclusion, ‘Community Video’ dealt with issues which still have a contemporary resonance – housing, play-space, discrimination, youth arts. This rich heritage is now under threat of disappearing, both because of the physical decay and disintegration of half-inch reel-to reel-tape, and the ageing memories of the original ‘Community Video’ practitioners.

LCVA archives and activates this history so that it can be used as a resource for contemporary debates and activism.